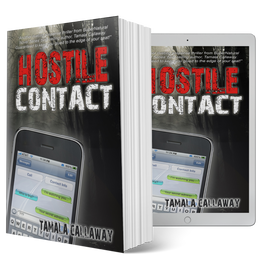 When Symone is faced with a stranger infiltrating her life, she finds herself wondering who can she really trust? Much of the evidence is pointing to her best friend and a new man that's pursuing her, … leaving her confused and afraid.

With the danger proving to be more serious than she had first believed, Symone has no choice but to put her trust in the one person she wanted nothing to do with.

Download File
"A great love story filled with drama and suspense. Endearing characters keep you wanting to read more, while a surprise ending longs for a sequel." - Rebecca High 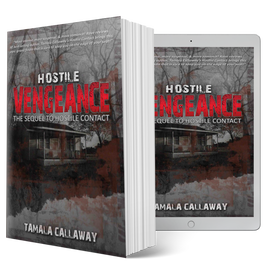 In this sequel to “Hostile Contact,” Trevor finds himself put into a devastatingly compromising position, one that may change his life forever. For the first time ever, he's caught at a disadvantage where losing control is not an option.

While trouble seems to be coming the norm in the lives of the newlyweds, Symone has other ideas concerning her new life. While being pregnant with her new husband's baby and maintaining a thriving new business should have been a joyous time in her life, things just weren't quite so exuberant.

Tempers flare, trust is challenged, and the game has changed tremendously.

Hold onto your seats! It's going to be a turbulent ride!
"This book was awesome. Kept you glued to it right to the end. I will be reading more by Tamala Callaway." - Debbie Moyer

"The first book Hostile Contact was soooo great I could not wait for this one. Hostile Vengence. The action and suspense started in the first two chapters and continued until the end. A good read and one that you can't put down." - Faye